Infographic: Why you’re getting so many cold calls from R&D tax companies

The R&D tax consultancy market has seen an influx of new companies offering to support R&D claims. On top of that, increasingly aggressive tactics are being employed by established R&D tax credit advisors desperate to compete with these often cheaper upstarts.

But have you ever wondered why these new entrants have suddenly popped up? How they’re able to undercut established consultants’ fees? And whether the service you’ll receive will even be worth the hassle of switching?

We feel that the influx of advisors into the R&D tax claims market is likely a culmination of a few things.

First, the government has made no secret that innovation – and research and development – are at the centre of their plan for growth. The knock-on effect, of course, is that more companies become aware of R&D-related opportunities and rewards like R&D tax relief. Businesses have diversified to make the most of what’s available through R&D, and professional service providers have followed suit.

While it might feel like it – we know many clients who are receiving cold calls and marketing from advisors on a daily basis – there still aren’t as many businesses claiming R&D relief as there could be.

Taking just one example sector you can see why advisors might be tempted to enter the market:

The latest statistics show that 74,205 R&D relief claims were made in the 2018/19 period. The manufacturing sector accounted for 17,055 of those claims and consistently dominates in terms of the number of claims being filed almost every year.

However, when you consider there were approximately 270,000 business enterprises operating in the manufacturing sector just a few years later, in 2021, there is obviously still an opportunity to help people seek relief who aren’t already.

Finally, there has been quite a gap left by the closure of PPI claims industry. With no PPI reclaims to go after, claim managers have also had to diversify, with many turning to R&D tax credits.

Because the market isn’t regulated and there is no formal qualification or accreditation needed to set up as an advisor, opening this kind of consultancy is, in the grand scheme of things, relatively easy.

So what’s the problem?

Unfortunately, claiming R&D tax relief isn’t the same as claiming for mis-sold PPI insurance at all, and it isn’t as simple as filling in a quick form.

R&D tax relief is there for companies who have genuinely undertaken R&D activity. It is tax relief, not funding that everyone is owed, and not something you should make a speculative bid for because a claims manager persuades you to. Bad claims are not risk-free; incorrectly or unjustly filing a claim can be tantamount to fraud, and it’s the claimant – not the advisor – who will bear the brunt of being investigated if such fraud is discovered. And if deliberate misuse of the system is proven, prison sentences can be issued.

What does HMRC say?

HMRC knows there is a problem. Why? Because the amount of R&D tax relief claimed in the last financial year does not match the rate of UK expenditure on R&D as reported by the ONS. The gap can’t be explained fully by relief being claimed on activity undertaken overseas or increased generosity of the schemes.

They put much of this down to the relief itself being so complex that it’s open to opportunities for abuse, combined with a lack of resourcing available to check claims.

They also pointed the finger at – you guessed it – advisors.

When questioned by the House of Commons about R&D tax relief abuse, HMRC focused on the role of advisers who, it said, ‘approach businesses and suggest, incorrectly, that some expenditure can be recharacterised as R&D to get tax relief.’

From the 2020-21 HMRC Performance Report to the House of Commons Committee of Public Accounts:

‘HMRC explained that when it challenges a claim, it can find the adviser has gone and the business does not know a great deal about the rationale for the claim. HMRC confirmed that it had a watchlist of advisers that it was worried about. It said the list would be of great benefit to it when claimants are required to disclose who helped them with their claim.’

A crackdown is coming

Did you notice the last part of the quote above: ‘…the list would be of great benefit to it when claimants are required to disclose who helped them with their claim’…?

That’s the first step in a list of ways HMRC is hoping to tackle R&D tax fraud.

Announced in the 2021 Autumn Budget new draft legislation to tackle abuse and compliance is expected to be published in the summer 2022 Finance Bill. This will:

These particular changes were not covered in the Spring Statement so until the draft legislation is issued we should assume all of the above will come into force from April 2023.

Several other conclusions and recommendations were made regards the tackling of fraud and abuse in the tax system in that HoC report.

Firstly, the HoC was reassured that deferred compliance cases will not be left unchecked.

HMRC expect compliance activity to return back to post-pandemic levels by 2022-23 as it addresses the backlog caused by resourcing issues felt during the peak of Covid-19.

Though the HoC has requested to see further evidence of how the backlog will be addressed, HMRC did highlight that the 2021 Spending Review gave them an additional £180 million in the next three years for ‘spend to raise’ activities, of which investigating compliance issues is one such activity: on average, HMRC generates £17 of compliance yield for each £1 it spends or £60 to every £1 for large business compliance activity. We know they have already employed hundreds of new investigators across the board.

The HoC also asked HMRC to work on the accuracy of reporting misuse of the R&D tax relief system, and so more random checks than ever before should be expected in the coming years.

Spot-checks have always happened and errors do occur, so promises of 100% success rates and 0% HMRC enquiry rates should be viewed with speculation. Your advisor should have a thorough process in place to deal with such enquiries and an established history of helping clients through such obstacles.

If you choose to source an R&D tax advisor to help with the claim process, you have four main options:

All of these routes have pros and cons and it’s ultimately up to you to find the best R&D tax consultant for your business, however, the infographic below gives an overview of the types of things that might differentiate one type of advisor from another if you don’t know where to start. 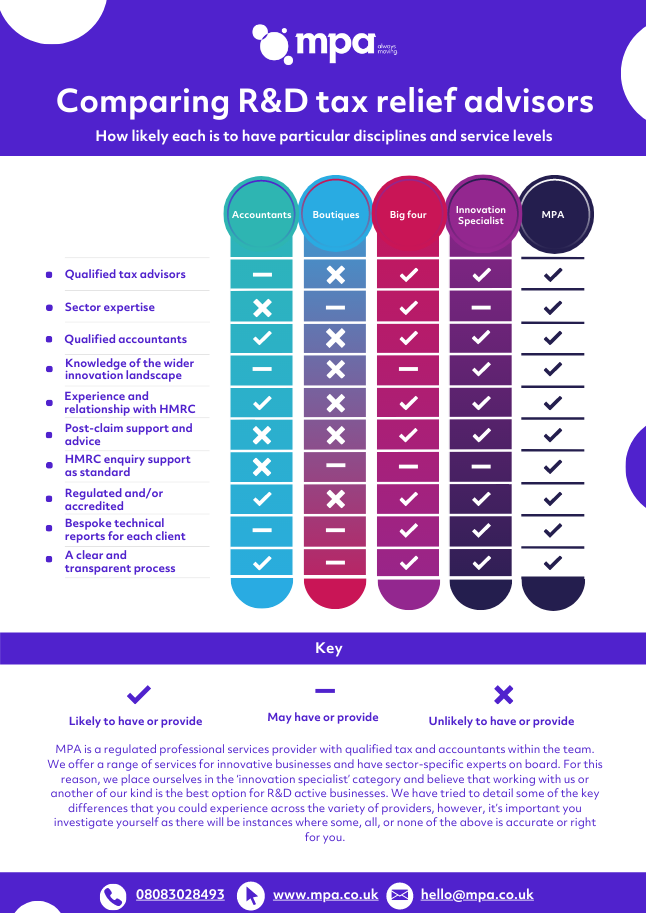 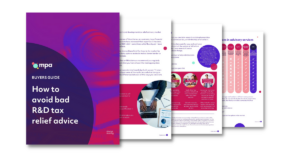 Download our free guide to learn more about your options when it comes to seeking R&D tax advice, and for an easy-to-use score guide that will help you assess your options quickly and easily.

We have 15 years experience in filing quality R&D tax claims so we’d love to work with you, but ultimately we just want the industry to get better and for every company investing in innovation to receive the rewards they deserve.