UK Prime Minister Boris Johnson lauded the loyalty of his cabinet and vowed to “get on with the job” on Tuesday after surviving a confidence vote of his Conservative MPs that has still left him severely weakened.

The beleaguered leader has insisted that Monday evening’s dramatic ballot, which saw 211 Tory party lawmakers support him remaining prime minister but 148 vote against, was a “conclusive” result.

“Thank you… everybody for all your good work yesterday, which was a very important day because we’re able now to draw a line under the issues that our opponents want to talk about,” he told his team of two dozen or so top ministers and officials.

“We’re able to get on with talking about what I think the people in this country want us to, which is what we are doing to help them.”

But most critics and commentators disagreed, arguing that Johnson’s authority has been hugely undermined and his days in Downing Street are numbered.

The Times called him “a wounded victor” while his former employers at the Daily Telegraph branded it “a hollow victory that tears Tories apart”. 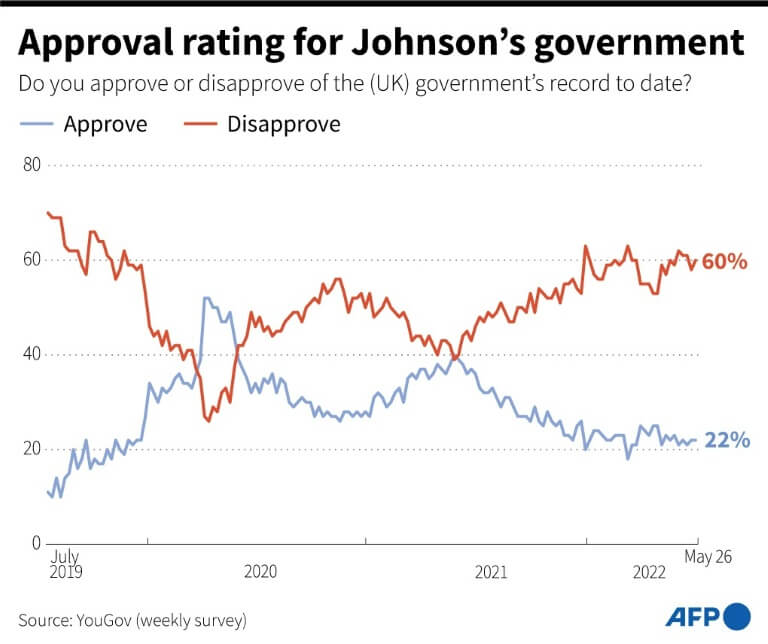 The vote — just over two years after the Brexit architect won a landslide general election victory — was brought after a string of scandals that have left the Conservative party’s standing in tatters.

Chief among them was the “Partygate” controversy over lockdown-breaking events at Downing Street, which caused public outrage and saw him become the first serving UK prime minister to have broken the law.

Johnson, 57, needed the backing of 180 of the 359 Conservatives MPs to survive the vote. Defeat would have meant the end to his time as party leader and prime minister.

Most of Johnson’s cabinet publicly backed him in the secret ballot.

But more than 40 percent of the parliamentary party — and almost certainly a majority of backbenchers — did not, setting up potentially tougher times ahead for the government in parliament.

Under current party rules the prime minister cannot be challenged again for a year, which leaves little time for any new leader to emerge before the next general election due by 2024.

In previous Tory confidence ballots, Margaret Thatcher and Theresa May scored better than Johnson yet despite narrowly winning their votes, both ultimately resigned after deciding that their premierships were terminally damaged.

Johnson has steadfastly refused to resign over “Partygate” and shows no sign of doing so now.

“Today, I pledge to continue delivering… we are going to get on with the job,” he said before the cabinet meeting.

Johnson has spent months fighting for his political survival after a series of controversies culminating in the “Partygate” saga.

Various opinion polls have shown the public think he lied about the scandal and should resign.

His Tories have lost several once-safe seats in by-elections and scored dismally in recent local elections.

They are expected to lose two upcoming by-elections later this month, including one in a previously rock-solid Conservative constituency.

The smaller opposition Liberal Democrats urged Tory rebels to resign from their party and sit as independents while Johnson remained leader.

However, Conservative MPs who voted against him were highly unlikely to take up the suggestion and appeared to be biding their time.

“This is far from a conclusive result — it’s not a defeat, but it’s not a win,” said Tory lawmaker Tobias Ellwood, who has been calling for Johnson to resign since February.

He said he accepted Monday’s result “for the moment”.

Johnson’s plans to move on include an upcoming joint speech with finance minister Rishi Sunak to tackle a worsening cost-of-living crisis.

He is expected to head to Rwanda for a meeting of Commonwealth leaders, then go to Germany and Spain for G7 and NATO summits.

Speculation is also mounting that he may reshuffle his senior ministerial team to reward those who backed him.

But many question whether he can recover his authority and voters’ trust.

“Deep inside, he should recognise that, and turn his mind to getting out in a way that spares party and country such agonies and uncertainties.”