The UK economy is on track to head back into recession as official figures showed that it fell in November after the country was hit by stricter coronavirus restrictions.

GDP at the end of the month was 8.5% below its pre-pandemic peak but is expected to fall further after a third lockdown took hold this month.

November’s decline came after six consecutive months of growth, with a 0.6% improvement in October. 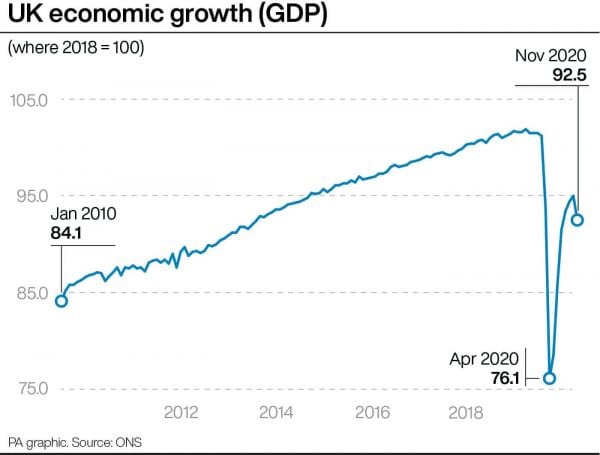 The latest figure was ahead of the forecasts of analysts, who had predicted a 4.6% decline for November.

Economists had warned that the UK is set to see a double-dip recession if restrictions remain in place in the first three months of 2021.

The services sector shrank by 3.4% in November as rafts of hospitality and leisure firms were forced to shut due to England’s second lockdown and strict restrictions across the other home nations.

The sector is now 9.9% smaller than it was in February 2020, before the impact of the pandemic was first fully felt.

Construction grew by 1.9% during the month as its recovery continued, while the production sector shrank by 0.1%, according to the new figures.

Darren Morgan, director for economic statistics at the ONS, said: “The economy took a hit from restrictions put in place to contain the pandemic during November, with pubs and hairdressers seeing the biggest impact.

“However, many businesses adjusted to the new working conditions during the pandemic, such as widespread use of click and collect as well as the move online.

“Manufacturing and construction generally continued to operate, while schools also stayed open, meaning the impact on the economy was significantly smaller in November than during the first lockdown.

“Car manufacturing, bolstered by demand from abroad, housebuilding and infrastructure grew and are now all above their pre-pandemic levels.”

For the first time in 11 years, the UK is officially in recession. The Office for National Statistics said the economy bounced back by 8.7% in June as lockdown restrictions eased, however, the impact of lockdown between April and June has taken its toll.