UK aerospace; the bigger, the better?

Between the first satellite being launched by man in 1957, to today with the likes of Elon Musk looking towards commercial space travel, few other sectors can claim such huge progress in such a relatively short amount of time.

Largely, these achievements have been made possible by three fundamental things: big companies, big investment, and big brains.

A lot of the names in the top ten aerospace companies list will be familiar.

According to Statista, Airbus had sales worth over $68.8 billion in 2020, and as of 2021, Boeing is estimated to have a net worth of somewhere between $150bn and $230 billion, depending on who you believe.

Of course, doing anything in the field of aerospace is intrinsically expensive, so you’d expect the top players to be worth a few…billion.

Materials need to withstand immense forces, the margin for error and tolerances are minuscule, things take longer to machine, and everything has a shorter lifespan.

While only one of those – Rolls-Royce – is actually headquartered in the UK, the average spend across this 10 on UK-based R&D was over £1bn – on average 10% of their global spend (2016).

Tracking R&D spend in the UK

That being said, according to ONS statistics, R&D spend in the aerospace sector hasn’t changed much in the last decade, falling somewhere between £1.4bn and £1.9bn total. 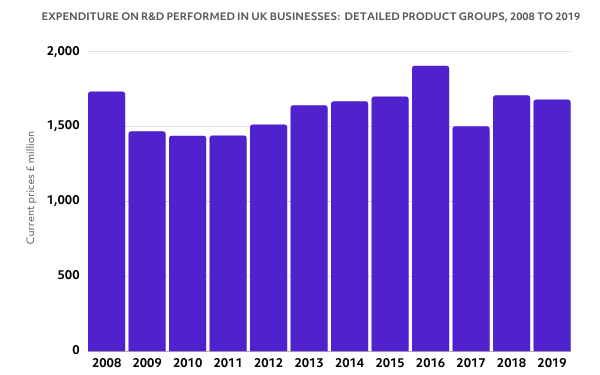 The focus is largely on applied R&D (R&D aimed at achieving a specific objective) versus experimental (R&D that looks to increase knowledge and devise new applications of available knowledge) or basic (R&D that seeks to acquire new knowledge of underlying facts without a particular use in view). 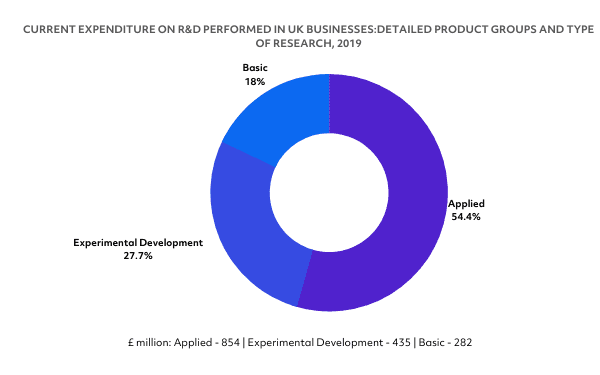 Behind every great innovative company are a host of great minds. Within aerospace, R&D departments are the key to success or failure; the space race is still on! And beyond space, there are lucrative military and civilian contracts also up for grabs.

ONS stats reveal that the majority of those employed in direct R&D roles across the aerospace sector in the UK fall in the scientist and engineer category.

Spend on salaries and wages within the sector is fifth highest – behind pharmaceuticals, motor, software development and miscellaneous technical testing and analysis activities. 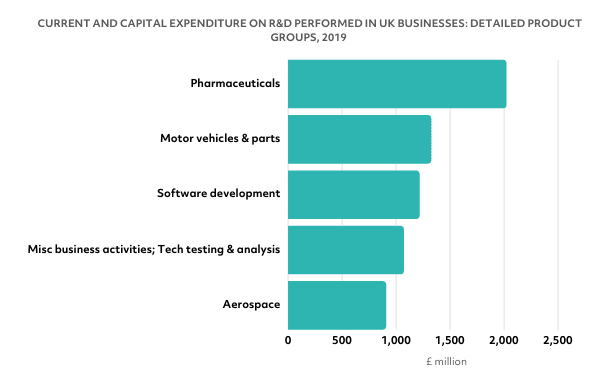 Interestingly, like many STEM-based (science, technology, engineering and maths) industries, there is a skills gap within aerospace despite exciting disrupters like SpaceX putting it back in the press.

That is starting to bridge, though, with recent data suggesting the COVID-19 pandemic has actually inspired children to look at STEM-based careers; 25% of the parents of children aged five to 16 across the UK surveyed said their child wants to become an astronaut!

Having been unsuccessful in buying refurbished Dnepr rockets in 2002, Musk decided to build his own. Space Exploration Technologies Corp. was launched and experienced rocket engineer and designer Tom Mueller was brought on board.

With investment from Musk, Mueller led a team to develop the first liquid-fuelled orbital rocket ever launched by a private company and the developments haven’t stopped since.

What’s interesting about SpaceX is not just that they didn’t feature on either of the top ten companies mentioned above despite the company pushing many boundaries in the sector; they also have relatively low development costs.

A now-famous statistic is that SpaceX was able to develop a rocket and crew capsule for $443m, whereas NASA said it would have cost them $4bn. Elon and co aren’t a government agency like NASA and so only employ those directly related to their main goals, and they’re focused on that applied R&D rather than being focused on general scientific discovery, so does that have such a big impact on cost? The SpaceX approach to R&D is certainly something that other disrupters should think about.

Musk and his talented team of designers and engineers are paving the way for commercial space travel, reusable technology, manned interplanetary exploration and more, bringing in what to outsiders like me feels like the dawn of a new space era.

Beyond of all the media-grabbing headlines linked to SpaceX, though, environmental issues are fuelling rapid change here like in every other industry, and remaining competitive is still a priority.

Green technology, reducing the cost of materials and manufacturing, improving performance, and creating more sustainable supply chains are just a few of the areas ripe for R&D investment.

If you’re an aerospace innovator or have undertaken R&D in any sector within the UK, the good news is that the government has several incentives to support you financially.

R&D tax relief allows you to claim back costs incurred and most companies regardless of size are eligible to take advantage.

Intrigued? Speak to one of our specialist R&D tax advisors today to see if you could be claiming on your spend.

The sector generates billions of pounds for the economy and creates around 42,000 jobs.

The UK pledges its support for ESA’s work to evolve and usher in a new era of space, keeping the UK at the forefront of cutting edge science, technology, and innovation.