Covid-19 vaccines, such as the ones developed by Oxford/AstraZeneca and Johnson & Johnson, foster “training camps” for infection-fighting cells that make the jabs highly effective in offering long-term protection, according to scientists.

Research from Oxford University suggests adenovirus vaccines can generate “strong and sustained populations” of a group of cells in the immune system known as “killer” T cells, which find and destroy infected cells that have been turned into virus-making factories.

This type of vaccine uses a harmless, modified version of a chimpanzee adenovirus (ChAdOx1) to enter human cells and trigger immune response.

The findings, published in the journal Nature Immunology, are based on studies conducted on animal models.

Paul Klenerman, Sidney Truelove professor of gastroenterology at the University of Oxford’s Nuffield Department of Medicine, and one of the lead authors of the paper, said: “Millions of people will have received adenovirus vaccines around the world – not only the Oxford/AstraZeneca vaccine, but the J&J vaccine, and also the Chinese and Russian versions.

“The ultimate goal with these vaccines is the induction of long-term immune system protection using both antibodies and T cells.

“This research helps us to understand more on the process of vaccination, and why the effects on killer T cells are so prolonged.” 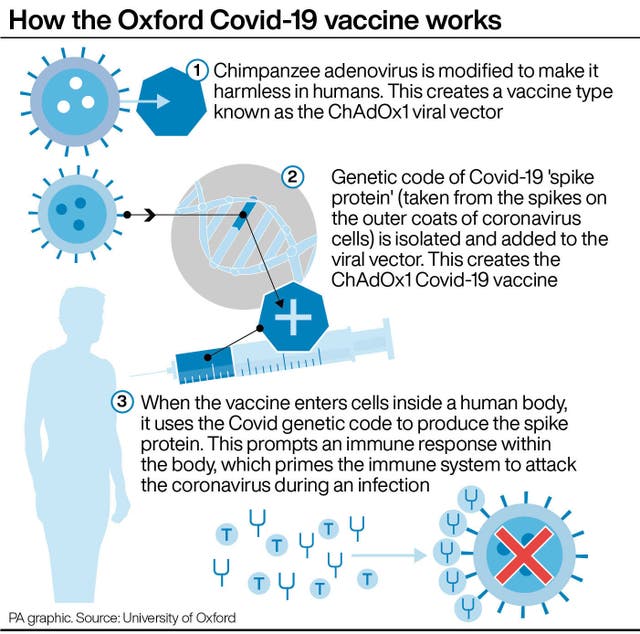 Antibodies are protective proteins produced by the immune system in response to infection.

The researchers looked at the mechanism behind adenovirus vaccine vectors for Covid-19, and observed that adenoviruses can get into long-lived tissue cells, which in turn formed small, well-organised clusters acting as “training grounds” for T cells.

Burkhard Ludewig, professor at the University of Zurich, head of the Medical Research Centre at Cantonal Hospital St Gallen, Switzerland, and also a lead author of the paper, said: “Adenoviruses have co-evolved with humans over a very long time, and learned a lot about the human immune system in the process.

“Viruses are always the best teachers, and here they have taught us an important lesson about how best to boost killer T cell responses.

“The T cells that come from these cellular training camps appear to have a very high level of ‘fitness’.”

He added this technology could be used to develop vaccines for other deadly diseases.

Prof Ludewig added: “Hopefully we can put this to good use in designing new vaccines – vaccines that we still desperately need for diseases such as TB, HIV, hepatitis C and cancers.”

What does it take to develop a vaccine?

Most vaccines must go through the same process before they are ready for use on the public.

The innovation powerhouses behind the COVID-19 vaccines

Research and Development is crucial to the pharmaceutical industry and no more so than in our current climate. We take a deeper look at the innovation powerhouses behind the UK's 3 approved Covid-19 vaccinations.

Business Secretary Alok Sharma announced the recipients of the first round of funding. A total of six projects will share part of a £20 million pot made available to speed up the response to the Covid-19 outbreak.