Every month we track the news and share the most relevant stories for UK business owners.

In February, the headlines were of course dominated by the Russian invasion of Ukraine, but outside of that, sustainability, Covid-19, data security, and the automotive sector were our most reported themes. 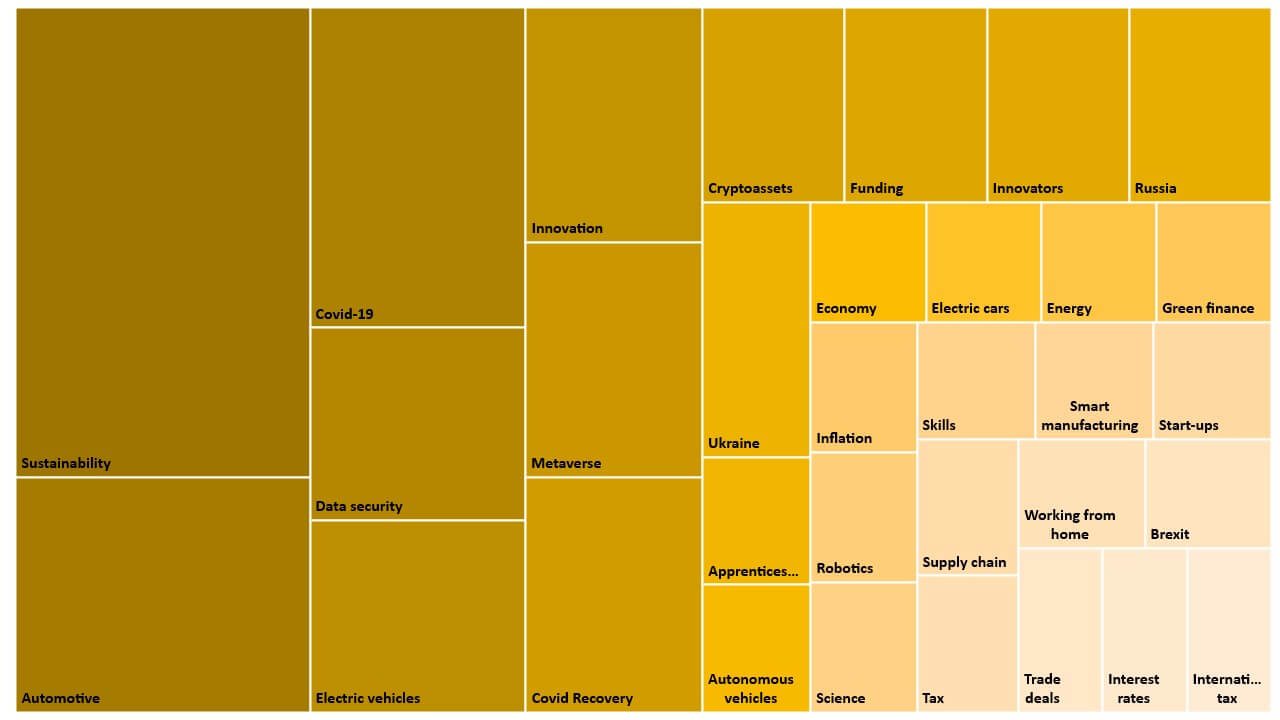 Here’s a breakdown of some of those highly-featured topics.

Towards the end of the month a landmark UN report exploring the impact climate change is having on our ecosystems was released that underscored the urgent need for adaptation – e.g. preparing for devastating, unavoidable consequences. A summary can be found here.

A historic treaty to tackle plastic waste was agreed by more than 100 nations but significant producers like USA and China were still unable to commit. An Organisation for Economic Co-operation and Development report found 460 million tonnes of plastics were used in 2019, and the Stockholm Resilience Centre said the impact of chemical and plastic waste is large enough to be affecting crucial functions of planet Earth and its systems.

Elsewhere, scientists in the UK set the record for generating fusion energy and windfarm investment continued to grow.

We shared several new pieces of MPA content on sustainability in February including:

Two years after the outbreak of Covid-19, the World Health Organisation finally had some good news to share, predicting we’re to enter a ‘long period of tranquillity’ due to high vaccination rates, Omicron being a milder variant, and the end of winter.

In the UK, Prime Minister Boris Johnson announced that self-isolation is no longer a legal requirement for those testing positive for Covid-19, while in China scientists announced that a new test that can give results within four minutes had been developed.

Financial results from key vaccine manufacturers AstraZeneca and Pfizer were also released in February, with the former stating that despite surging revenues profit suffered, and the latter reporting a doubling of annual profits.

UK businesses were urged to apply for Covid-19 support grants that are still available through councils for local businesses. In particular funds for hospitality and leisure are still out there for businesses struggling to recover.

As Meta talked up their efforts to build its immersive virtual metaverse, the ongoing European to US data transfer issue continued to add an element of doubt to the future of its plans.

Indeed, proposed changes to address customer privacy issues by Google were accepted by Britain in February, and analysts warned start-ups “don’t be Google”, as its early practices continue to be questioned.

Toyota also had to halt operations at one of its plants in Japan in February due to a reported cyberattack affecting the production of 13,000 vehicles.

Hybrid and electric vehicles continue to be in the news almost daily as demand for more sustainable transport solutions skyrockets.

The European Automobile Manufacturers’ Association announced that hybrid sales reached a milestone of taking the same market share as diesel vehicles, with self-charging hybrids accounting for nearly 20% of new passenger cars registered across the 27-EU nations in 2021 – up from 11.9% in 2020.

Volkswagen said it’s looking to list luxury brand Porsche to fund its move to electric vehicles, and Toyota also released plans to change their business by splitting into two companies, separating out its devices segment.

The move is in an effort to boost stock performance and speed up decision-making in the semiconductor arm, which may come as a relief to some manufacturers still experiencing supply chain issues. Ford announced that Q4 profits were hit by stock shortages and high commodity costs; Nissan hiked annual profit forecasts despite shortages hitting production figures; and Toyota beat its forecast to hit $6.8bn profit for the three months to December, again, despite ongoing supply challenges.

We can’t cover the automotive sector without Tesla taking up some of the space, and in February we saw news on the brand ranging from speculation about its autonomous vehicle campaign to mass recalls of some electric cars.

Inflation and interest rates have been consistently in the news for the past few months, and February saw another rise in interest rates to mitigate the damage that high inflation is having across the UK economy. Borrowing costs were raised another quarter point to 0.5 percent, the level before the pandemic – a move that divided policymakers, some of which wanted a larger increase to 0.75%.

Annual inflation hit the highest level since 1992, and the ONS also said the Consumer Prices Index hit 5.5 percent in January, a level also not seen in almost three decades.

ONS did also release new economic growth statistics in February that showed a rebound from the pandemic; Britain’s economy grew by a record 7.5% last year, the fastest expansion since records began in 1948 and following a record 9.4% slump in 2020.

Visit our News and Insights section for all the latest headlines, free resources, and expert insight.

Get in touch with our team of qualified tax and accountants for help navigating Covid-19 support, assessing the impact of economic news on your business, or if you have any other business questions.

Our favourite stories from across the web August 2021

Our favourite stories from across the web July 2021

Our favourite stories from across the web September 2021