Robot waiters take Iraq’s Mosulites back to the future 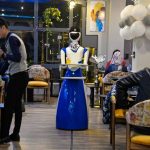 From the rubble of Iraq’s war-ravaged city of Mosul arises the sight of androids gliding back and forth in a restaurant to serve their amused clientele.

“Welcome”, “We wish you a good time in our restaurant”, “We would be happy to have your opinion on the quality of the service”, chime the automated attendants, red eyes blinking out of their shiny blue and white exteriors.

“On television, you see robots and touch-screen tables in the United Arab Emirates, Spain and Japan,” said Rami Chkib Abdelrahman, proud owner of the White Fox which opened in June.

“I’m trying to bring these ideas here to Mosul.”

The futuristic servers are the result of technology developed in the northern city, erstwhile stronghold of the Islamic State jihadist group.

“We saw the concept on social media in more than one restaurant,” said Abdelrahman, a dentist by profession. 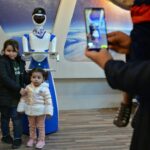 Occupied by IS between 2014 and 2017, the northern metropolis of Mosul still bears the scars of war.

But at dinnertime, patrons of the restaurant that is packed every night can escape from the city on a voyage through space.

An astronaut floating across the muralled wall sets the scene and views of Earth and other planets as seen from space give customers the sense of peering out through the portholes of a spaceship.

The ceilings are speckled with glowing constellations.

But the star attractions remain the two androids, sporting a scarf and black beret, shuttling back and forth across the restaurant on rails to deliver orders.

As they approach, smartphones come out and children promptly line up next to them for a souvenir snapshot. 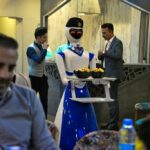 The robots are imported, Abdelrahman explained without giving the source, adding that everything in the restaurant is digital, including the 15 touch-screen tables with built-in menus.

A team from the University of Mosul’s department of mechatronics — integrating several fields of engineering as well as robotics — was in charge of programming and connected a network and server to the restaurant.

Humans have not been completely replaced by machines.

Four young waiters are busy picking up the dishes from the robots’ trays and placing them on the tables. 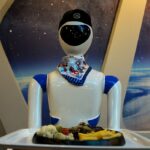 Having dinner with his wife, Bashar Mahmud was won over. He took a selfie, smiling broadly.

“I’ve travelled abroad and I’ve never seen anything like this, not in Turkey, Jordan or Saudi Arabia,” exclaimed the 50-year-old blacksmith with a salt-and-pepper beard.

Co-op expanding use of robots to deliver goods

The retail giant has plans to use up to 300 robots by the end of next year.

Highlights from the World Robot Conference 2021

Over 110 companies and institutes showcased their latest products and innovations at the Robot in Beijing this week. Here are some of the highlights.