Britain saw a record 356,000 increase in the number of workers on payrolls last month and vacancies soared as the economy recovered, official figures have shown.

The Office for National Statistics (ONS) said payroll figures rose for the seventh month in a row between May and June, while firms hired at a blistering pace after indoor hospitality reopened ahead of the final lifting of restrictions on July 19.

The increase in payrolled workers was the biggest since those records began in 2014.

The jobless rate dropped again, to 4.8% between March and May, against 5% from December to February, in line with a revised figure of 4.8% for the three months to April.

He said: “We are bouncing back – the number of employees on payrolls is at its highest level since last April and the number of people on furlough halved in the three months to May.” 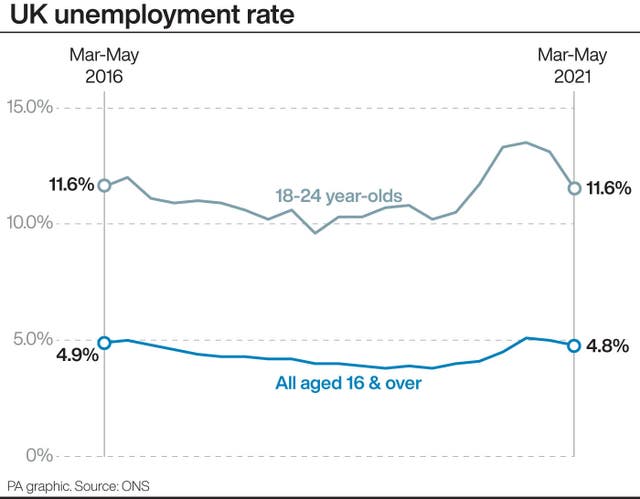 But the ONS also said that, despite seven months of increases, the number of payrolled workers has fallen by 206,000 since the pandemic hit.

Darren Morgan, ONS director of economic statistics, said: “The labour market is continuing to recover, with the number of employees on payroll up again strongly in June.

“The number of job vacancies continued to rise very strongly.

“The biggest sector driving this was hospitality, followed by wholesaling and retailing.

“As the economy gradually reopened, the unemployment rate fell in March to May. This was especially marked for younger people, who had been hardest hit by earlier lockdowns.”

The data showed some jobs cheer for hard-hit younger workers, with an increase of 101,000 payrolled employees aged under 25 last month.

This was driven by record hiring levels in the hospitality sector, with vacancies up 73,400 on the previous quarter, and soaring vacancies in wholesale and retailing as the sectors benefited from relaxing restrictions.

But despite the improvements in the jobs market, experts are forecasting unemployment to rise once the furlough support scheme comes to an end in September, although this is set to be far less than initially feared.

The data also showed total wage growth including bonuses soared to 7.3% in the three months to May, or 6.6% excluding bonuses, with further rises expected.

This puts the Government on track for a potential mammoth bill for its triple lock state pension pledge, which guarantees that annual pension payouts will rise in line with inflation, earnings or 2.5% – whichever is higher.

The ONS said this was being skewed due to a big fall a year earlier, while many jobs axed in the pandemic have been lower-paid roles.

The Office for National Statistics said there were 197,000 more people in payrolled employment last month compared with April.

Could ending the furlough scheme spark a surge in unemployment

In a recent report, NIESR hailed the Government’s coronavirus job retention scheme but called on the Chancellor to extend it into next year to preserve jobs.

A study by conciliation service Acas found that half of employers expect an increase in demand for flexible forms of working after the pandemic.