While countries, cities and companies have massively ramped up net-zero emissions promises in recent months there remain “major flaws” in many plans, according to an analysis published Monday that raises fears of potential large-scale greenwashing by businesses.

Faced with mounting urgency and public pressure as deadly and costly climate impacts increase, governments and corporations issued a proliferation of net zero pledges in the run up to the United Nation’s key climate summit in Glasgow last year.

Most rich countries have announced they will be net zero by 2050, while China and India have vowed to reach that point by 2060 and 2070, respectively.

“The use of that concept has simply been booming,” said Frederic Hans, climate policy analyst at NewClimate Institute and the report’s co-lead author. 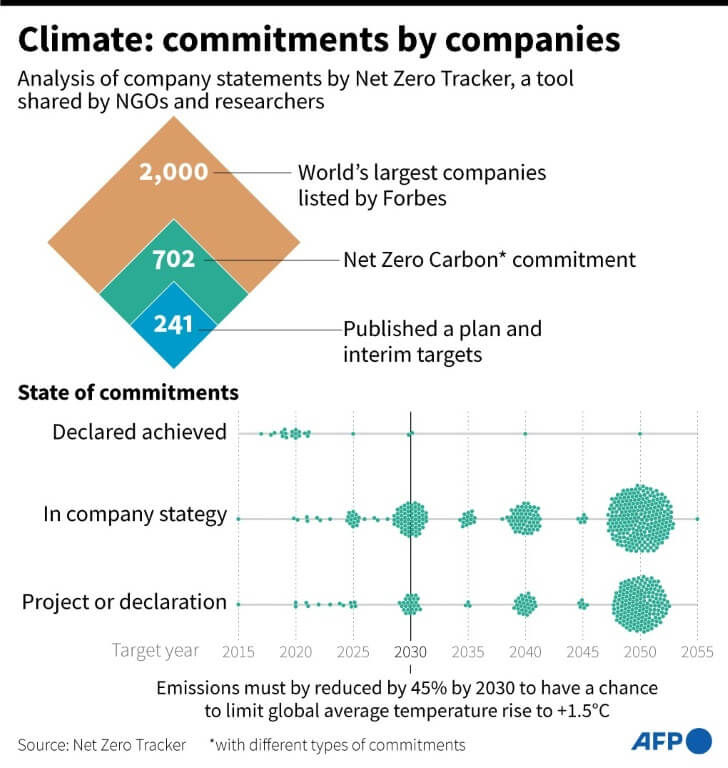 But the devil is in the details.

“If you set a net zero target and you do not communicate in any way what emission reductions are implied by the targets, then nobody knows, you cannot be held accountable,” said Hans.

The report draws on a database of over 4,000 governments, cities, states and major companies and comes as climate negotiators are meeting in Germany to prepare for major UN talks later this year.

It does not drill into exactly how each net-zero plan will negate the amount of greenhouse gases it emits, instead focusing on monitoring how robust the targets are and whether they are followed up with a specific pathway to action.

It found that more than 90 percent of the world’s economy is now covered by promises by governments to reach net zero — a near six-fold increase in three years.

One third of the world’s largest publicly-traded companies also now have net zero goals — 702 firms, up from 417 in December 2020 — they said, while the number of major cities with these emissions reduction targets has doubled to 235.

“We are now at a watershed moment where peer pressure to hastily set net zero pledges, especially in the business sector, could result in either a mass flow of greenwashing — or a fundamental shift towards decarbonisation,” said co-author Takeshi Kuramochi, senior climate policy researcher at NewClimate Institute.

The Net Zero Tracker analysis looked at a range of factors, like if detailed plans are published — or, for governments, enshrined in law — and included key interim targets that would ensure early carbon-cutting action.

The report found that 65 percent of national net zero targets had been set in domestic law or included in policy documents by May 2022, up from just 10 percent in December 2020.

But even among the 702 firms that had net zero promises, the report found that only around half had some kind of interim target, which it deemed “unacceptably low”.

Only 38 percent of these companies include all emissions associated with their products and activities — from supply chains to consumer use and disposal — in their net zero plans.

The report found that big corporate emitters, particularly the fossil fuel industry, were among those most likely to have net zero goals.

“This likely reflects the societal pressure on these industries to align with long-term emissions goals, and perhaps represents symbolic behaviour –or even flat-out greenwashing — rather than corporate climate leadership,” it said.

UN experts have said carbon pollution must peak before 2025 and be cut in half by 2030 from 2010 levels to have a chance of reaching the Paris climate deal’s more ambitious goal of capping global warming at 1.5 degrees Celsius above pre-industrial levels.

Greenhouse gas emissions last year regained the record levels of 2019 after Covid lockdowns lowered them in 2020.

Hans said it was possible that the flood of net zero promises could generate a virtuous cycle.

“It requires companies to step up, regulators to step up, civil society to be ready and researchers so that this really improves over time,” he said.