Social
Home » News & Insights » Can I include contractors in my R&D tax credit claim?
eee

Can I include contractors in my R&D tax credit claim?

Skip to the relevant section:

When considering what costs you can include in an R&D tax relief claim, it’s easiest to think about the parts that made your R&D project(s) possible:

There are different rules that apply to each of these four areas when it comes to the costs you include in a claim for R&D tax relief.

Here we take a closer look at ‘people’ costs, and specifically the rules around claiming when working with independent contractors (or ‘externally provided workers’ – EPWs) and subcontractors on R&D projects.

You should note that contractors – regardless of the type – do not have to be UK-based, and the R&D work they did for you does not have to have been undertaken in the UK for you to claim R&D tax relief on the cost of them doing that work.

What’s the difference between an EPW and a subcontractor?

While to most there doesn’t appear to be much distinction between independent contractors/externally provided workers and subcontractors, HMRC defines the two quite different, and then further separates subcontractors into ‘connected’ or ‘unconnected’.

Determining what type of contractor you’re working with comes down to a variety of things, like who bears the burden of risk, the level of autonomy the worker has, and who dictates deliverables amongst other things.

There’s more about determining if a member of your workforce is a contractor as opposed to an employee in this article.

Here is a brief description of the three HMRC definitions:

Keep reading for more on these definitions and to understand what costs you can claim for when working with each.

To HMRC an independent contractor is one sourced through an agency or staffing company.

This means that you would pay an agency rather than the individual carrying out the R&D for you, and there would be a contract in place to this effect.

Ordinarily, independent contractors’ fees would be charged by the hour or day, and if any remedial work were required you would be responsible for further fees incurred rather than the them.

They would also be working under your supervision like an employee, but cannot be a director or actual employee of your company.

A subcontractor, on the other hand, is someone you would pay directly for a fixed-price project.

This means that any remedial work would be included in the overall project cost (so additional time or resources required for this would be covered by the them and not you).

They must invoice you through a company, or if self-employed be able to show that they are working on a fixed price project.

How much can I claim for contractors under the SME scheme?

Find out more about the calculation differences below.

To decide how much of the cost of employing an independent contractor you can include on your R&D tax relief claim, you need to look at the cost against the proportion of their time spent on research and development activity.

Because you can apply for relief on up to 65% of that fee, the total you could claim for against that contractors’ cost to you is £3,250. 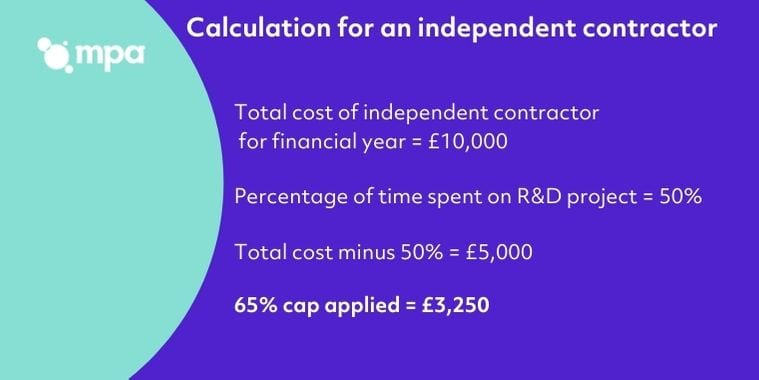 There are two types of subcontractors under HMRC rules – connected, and unconnected – and what costs you can claim for differs for each.

Where a subcontractor is provided by a company that is controlled by the same shareholder(s) or is within the same group, they are called ‘connected contractors’.

The claim you can make against the costs of employing these types of subcontractors depends on understanding on your costs vs their costs.

Essentially, HMRC will allow you to claim for whichever is lower; the payment you’ve made to them, or how much they’ve actually spent on completing the work.

For example, if you take a project that your connected subcontractor charges you £100,000 to complete but it only actually costs them £90,000 to do the work, you would have to claim on the lower, £90,000 cost.

Unlike with independent contractor claims, there is no cap to be applied to these costs. 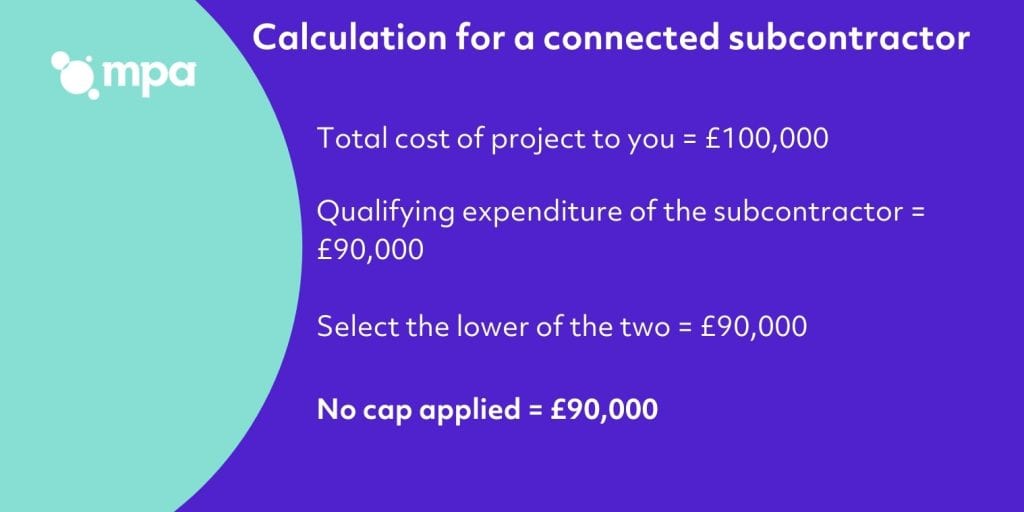 Unconnected subcontractors are those you pay directly for a fixed-price project who are not from a company connected to you through ownership (as above).

As with independent contractors, you can claim 65% of costs attributed to R&D work by unconnected subcontractors and the cost to them of completing the work doesn’t come into play. 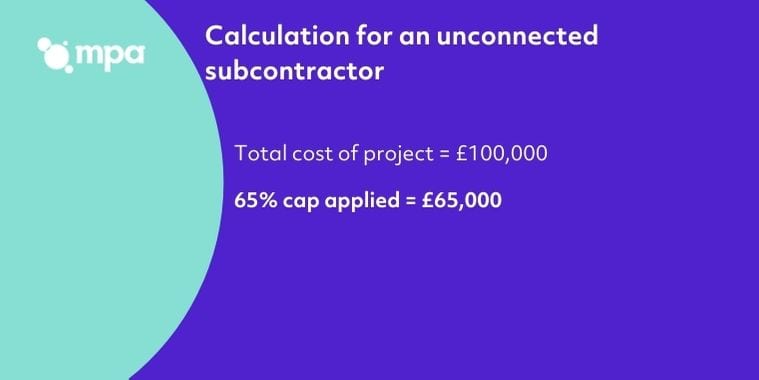 Here are some working examples of how the status of your contractors affects what you can claim. 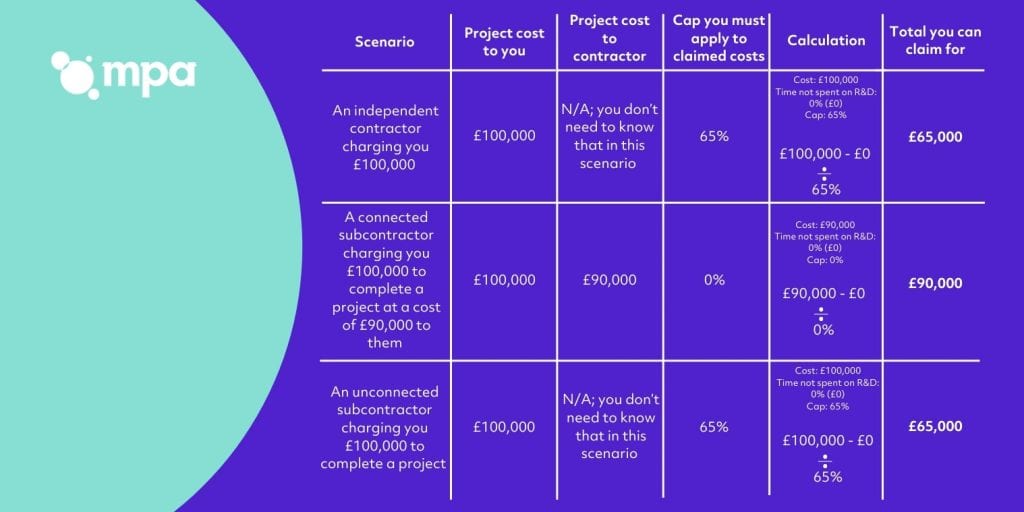 *In all scenarios above you also need to consider the time spent on R&D. The able above assumes your contractors have spent 100% of the time on the project working on R&D activities however in practicality that’s rarely the case, and it’s important you keep a record of how time is spent from the start to make your claim process as smooth as possible.

If any of your contractors spend time on things that are not R&D-related, then you cannot include the costs assigned to that time in an R&D tax relief claim.

With regards to subcontractors, another important point to note is that HMRC only allows one claim per project per financial year; because subcontractors can independently claim for R&D tax relief, you must check with them that they haven’t already claimed against costs on the same project and vice versa.

How much can I claim for contractors under the RDEC scheme?

For larger companies claiming R&D tax relief under the RDEC scheme, expenditure on work contracted to other parties isn’t generally allowed. There are, however, exceptions, if it’s contracted to:

A qualifying body is a charity, an institution of higher education such as a university, a scientific research organisation or a health service body. HMRC also maintains a list of designated non-UK-based subcontractors that can be included in claims.

Although designed for larger companies, SMEs can also claim through RDEC when they’ve been subcontracted to do R&D work by a large company.

What are subcontracted R&D activities?

R&D activity is that which seeks to advance science or technology. It could include things like exploring technical feasibility, design and modelling, prototype development and testing.

Where one person/company is contracted to carry out R&D for the another, that R&D activity has been subcontracted.

The examples HMRC gives are as follows:

Where one company engages another company to carry out R&D activity on the first company’s behalf in exchange for payment, with the first company having rights to the intellectual property resulting from the R&D, then that is subcontracting of the R&D to the second company.

Where two companies are both carrying out R&D on the same subject jointly, with each making a contribution and each free to enjoy any fruits of the R&D, this is collaborative research and each company would potentially be eligible for R&D relief on its share of the qualifying expenditure.

Where a company carries out R&D on its own account (retaining use of the intellectual property in the work) and simply receives a subsidy from another entity, this is not subcontracting – it is subsidised expenditure.

Where one company carrying out R&D pays another company for the provision of workers or materials this is not subcontracting of the R&D.

This is clearly a complicated topic, and the quickest way to identify qualifying subcontracted activity is to seek the advice of tax relief specialists like MPA.

I am a subcontractor – can I claim R&D tax credits?

Yes, you can make a claim like any other company that qualifies for R&D tax credits, but costs can only be claimed on once. So if your client has already claimed relief on your costs as part of the same project, you won’t be able to also file a claim.

We work with many companies who regularly employ contractors to help them with R&D and specialise in helping people quickly identify qualifying activities.

If you think you’ve done some great innovative work over the last two years we’d love to hear about it.

In this guide I’ll unmask the ‘worry’ that is an HMRC enquiry, what it is, why it happens and what to do. I’m confident that at the end you’ll conclude that the bark of an HMRC enquiry is far worse than its bite… and definitely not worth missing out on the benefits R&D tax credits can provide your business.

Three things you do that qualify for R&D tax relief

When people think of research and development (R&D), they often picture large corporations or specialist science, tech or pharmaceutical companies. Perhaps this explains why, despite Government efforts to encourage innovation through the introduction of R&D tax credits, only one in five ‘innovation active’ businesses have ever claimed.

Innovation is a critical element if an economy is to thrive. Mike Price, Director at MPA, writes about how the government’s R&D Tax Credit scheme rewards companies that invest in innovation, and urges more companies to take advantage of this funding.