Yesterday Chancellor Rishi Sunak made the autumn budget announcement to a lively House of Commons, with Deputy Speaker of the House Dame Eleanor Laing at the helm.

He started with some encouraging scene-setting, stating that employment is up, investment is growing, and public finances are stabling, declaring the UK is recovering fast than its ‘closest competitors’.

Sunak went on to reiterate the importance of innovation and business investment in recovery and growth plans.

We need to do what the people of this country have always done; invent, discover, and create the ideas and technologies that will change the world

Here are some key announcements that innovative SMEs need to understand, recognise, and consider moving forward. Read a recap of the Spring Budget announcements here or download the full Autumn Budget document here.

Unsurprising with COP26 just around the corner, the Chancellor took the opportunity to reiterate the important of NetZero and green technology in the governments vision for a Global Britain.

There was a recognition, then, that investment in innovation, and particularly in science and technology, needs to be strong, and that the UKs most inventive firms need to be supported.

On top of the Help to Grow scheme to support training and digital adoption; the Made Smarter programme to help boost productivity of manufacturing SMEs using advanced technologies; and the Future Fund: Breakthrough initiative – all launched earlier in the year – these new announcements were made: 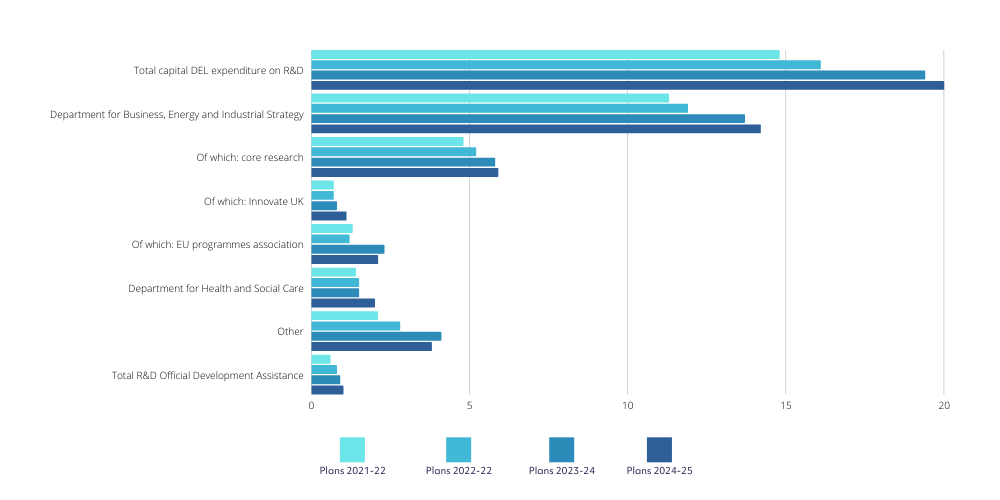 The R&D tax relief system was put under consultation in March, and that consultation closed a few months ago. Several aspects of the system were reviewed, including the type of expenditure that can be claimed on, and whether the regime should be targeted more towards specific sectors or regions.

As mentioned above, additions to that qualifying expenditure were announced this budget, as was something else: changes to claiming on international R&D activity.

ONS statistics suggest that while tax relief was claimed on £47.5bn of expenditure in 2019, businesses only carried out £25.9bn of privately financed R&D within the UK, because at present, companies can claim for activity taking place overseas.

Although full details will be published in a separate report later in the autumn, we should expect a tightening of what international activities can be included in claims moving forwards.

It is expected that changes will be legislated for in the 2022-23 finance bill, to take effect from April 2023.

When the R&D tax relief scheme went into consultation earlier in the year, there were two key things that we here at MPA wanted to see come out of it: for the system to evolve with businesses, and for fraud and misuse of the system to be addressed. Both are being tackled.

The inclusion of cloud computing and data to qualifying activity is long overdue, and an important change to keep the system modern and relevant.

This will, of course, increase the value of some claims, raising the amount HMRC spends. Therefore, the tightening on the inclusion of overseas R&D makes sense for the government, just not necessarily for all businesses.

We believe that the biggest impact here will be on global companies who collaborate with international teams on R&D.

But, we don’t yet know the extent of the changes. It’ll be interesting to see exactly what they are and what is put in place to mitigate a potential decrease in UK R&D as a consequence of making international collaboration less rewarding.

Our recommendation is for anyone who undertakes R&D in this way to review that process now to be ready for changes from 2023.

Access to talent and skills has been an issue across multiple industries for quite some time and some announcements were made to help tackle that.

New Scale-up, High Potential Individual, and Global Business Mobility visas will support the migration of highly skilled people, a new Global Talent Network will be created to help find, attract, and relocate the best global talent in science and technology.

One final thing to recognise is that plans were set out to address the geographical economic disparity we have across the UK.

High levels of competition and innovation within a region, in turn, attract more skilled people, open to technological change. In the UK, there are only a handful of places producing ten or more patents per 1000 people; given its links with productivity, it’s thought this is responsible for some differences in regional productivity levels. This is being addressed through more local funding being made available, and investment in the infrastructure that will make areas more attractive for businesses investment and population settlement

Other points to note for businesses

The extension of the £1m cap on the annual investment allowance for capital investment in plant and machinery assets is great news for companies looking to invest and exit the pandemic in a strong position for growth.

The Chancellor has highlighted in the budget the government support for UK businesses investing in R&D but also targeted business with a call to arms to do more in this area. Studies have shown that companies who invest in R&D grow faster than companies who do not.

The message from Sunak this budget, like the last, was clear: the future of the UK is green, it’s geographically fair, it’s productive and it’s highly skilled. This government believes that all businesses have a duty to support this vision, and there is funding and rewards out there for those that do.

If you need help navigating any of these announcements or planning for changes coming down the track, bring a skilled innovation tax, accounting, and funding advice specialist like MPA on board today.

Last week, Chancellor Rishi Sunak set out the government plans for taxation and spending over the next year with his annual budget. We’ve rounded up everything innovative businesses need to know about the plans designed to help them build back better from the pandemic.

A summary of the 2021 budget announcements

Read the key takeaways from the March 2021 budget below.

Yesterday the Chancellor of the Exchequer, Rishi Sunak outlined the state of the economy in the Budget, find out the key highlights and how they impact your business.