Blog: A quick look at: women and the economy

On 4 March 2022 the House of Commons published a report examining women’s participation in business across the UK called Women and the economy.

It looks at trends in employment, women’s earnings, and explores the role women play in leading UK businesses.

Ahead of International Women’s Day, let’s look at some of the most interesting findings and see whether inequality in the workplace has improved at all in the last decade.

Although it’s been gradually decreasing since 1997, there is still a very evident gender pay gap. 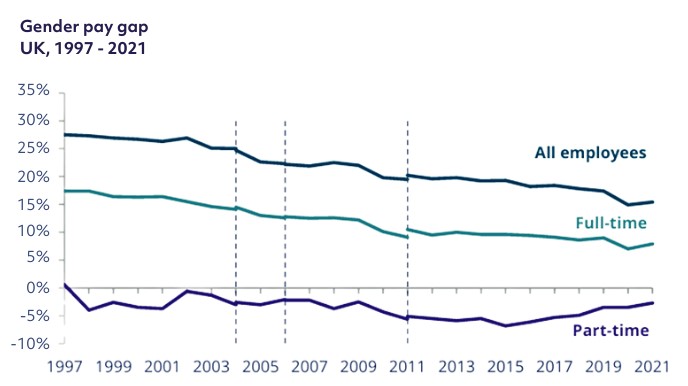 The 15.4% statistic comes from the ONS Annual Survey of Hours and Earnings as per the chart above, but large employers are also required to report gender pay gap information. When we look at that, across all employers who reported, the gap is 12.8%, also based on median hourly pay.

So either way, there is clearly still some work to be done to bring female pay in line. 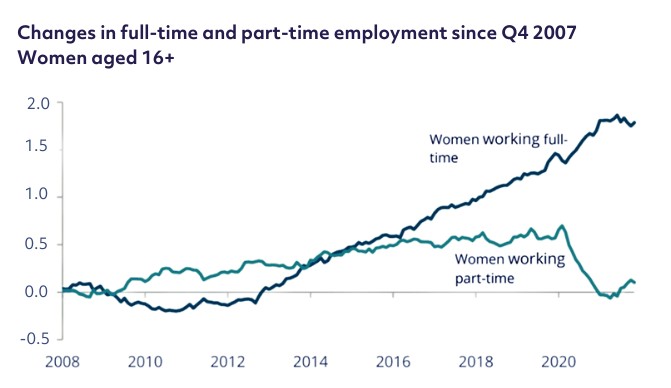 It’s thought the positive part-time pay gap could be down to highly educated and experienced professionals choosing to reduce their hours after they’ve started a family, resulting in more qualified women taking part-time hours and, as a result, demanding higher compensation.

This theory is supported if you look at how the gender pay gap differs between age groups. 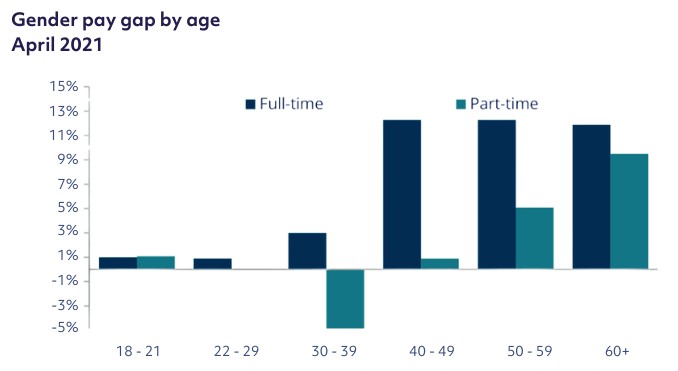 Time spent out of the labour market is one explanation, but other differences like educational attainment in younger generations propelling employment in higher-paying industries or occupations should also be considered.

Women are still much more likely than men to work as employees (90% of women vs 84% of men), although the number of women identifying as self-employed has continued to increase since the financial crash in 2008 (self-employment figures for both genders fell over the pandemic). 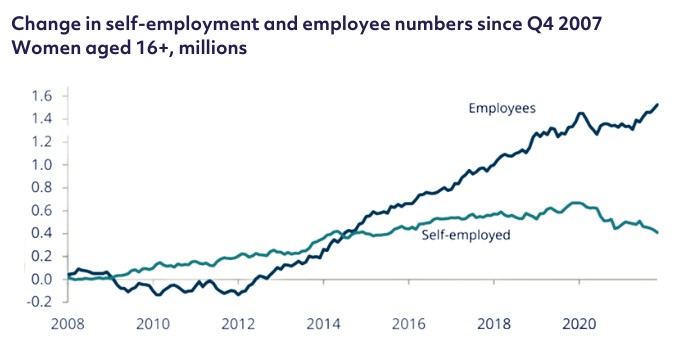 It’s estimated that women-led SMEs contribute around £85bn to UK economic output every year, but the number of SME employers led by women in 2020 was still relatively small at just 16% (that is SME employers either led by one woman, or by a management team that is majority female). Female-owned or led SMEs with no employees was slightly higher, at 21% in 2020.

These statistics, though, are not significantly growing year on year, and there is still work to be done particularly in attracting women to ‘total early-state entrepreneurial activity’ – or, start-ups. 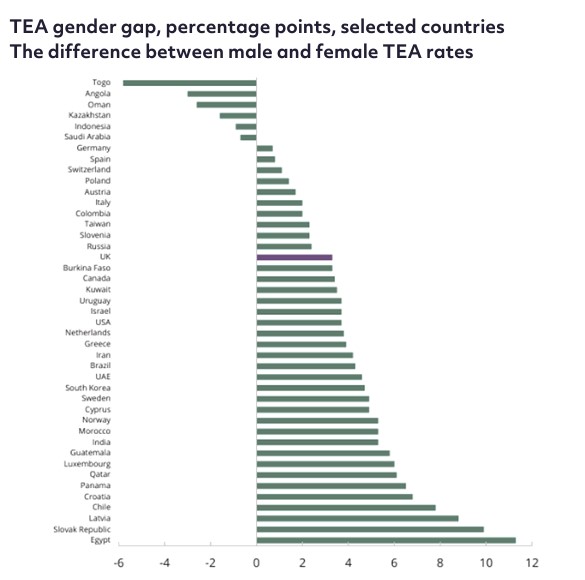 In 2020/21, the TEA rate in the UK (the proportion of working-aged people involved in TEA) was 9.5% for men, and 6.2% for women. This means that the TEA gap (the difference between the male and female rates) was 3.3 percentage points in the UK.

Germany, Spain, Italy, and Poland all rank above the UK for women participating in start-up activity, with Saudi Arabia, Indonesia, Kazakhstan, Oman, Angola, and Togo all showing a higher proportion of women being involved in start-ups than the proportion of men.

As well as low representation in the start-up sector, women who do lead UK SMEs also tend to do so in sectors that were vulnerable to the effects of the Covid-19 pandemic.

Examining only SMEs with employees, women-led businesses were most likely to be in the health (37%), education (36%), accommodation and food services, and other services sectors (both 25%). “Other services” includes businesses such as sports facilities, funeral homes, hairdressers, and businesses offering beauty treatments.

Many of these sectors were the most severely impacted by restrictions introduced to combat the spread of Covid-19.

While these businesses will most likely have received a variety of local authority and national scheme financial support during the pandemic, there is evidence to suggest that female-led businesses may have struggled to source the same support as male-led ones.

As the Future Fund provided convertible loans to UK start-ups and considering the lack of female activity in the start-up space, this isn’t surprising but is still disproportionate.

Researchers from Kings College London published a report in September 2020 that discussed the challenges for entrepreneurs during Covid-19 (PDF), including gender impacts.19 The report concluded there were many areas where female and male entrepreneurs’ experiences did not differ but, “on balance, the Covid-19 pandemic impacted women entrepreneurs more adversely than men entrepreneurs.”

Looking at pay equality and female leadership is one way we can assess how far we’ve come in achieving female equality in the workplace but there is so much more to be done.

The International Women’s Day website has some excellent resources for companies trying to develop inclusive work cultures where women’s careers thrive, and we would encourage everyone to check them out.

Already doing something great? We want to hear your stories of women breaking down barriers, achieving big, and thriving in your sector. Share them with us on LinkedIn or Twitter and we’ll celebrate with you.

Mentors are sounding boards, coaches, and motivators, and those in the innovation space may find a good partnership can help them through everything from identifying opportunities and gaining insight, to honing communication skills and launching projects. But where do you find business mentors? Keep reading for a few ideas.

Take our quiz to see how much you know about UK inventors of the past, present, and future!